Cesviamo: a social network for solidarity

It reminds me of the concept of The Long Tail... that was first coined by Chris Anderson to describe a particular business strategy, such as for example Amazon.com, that consists in selling a large number of unique items, each in relatively small volumes. The main characteristic of these kind of businesses is to realize profit by selling small quantities of (even "hard-to-find") items to many customers, instead of selling large quantities of a small number of more popular items.

Cesviamo exploits a similar idea, but for very different purposes: it is an initiative of Cesvi, an aid agency aimed at transforming the values of “human solidarity and social justice into humanitarian aid and development initiatives for the affirmation of universal human rights”.

What is ingenious in the Cesviamo initiative, is the conceptualization of a humanitarian project not as a single big objective, but rather as the sum of many, small objectives, accessible to all.

For example: Pietro, by eating 20 ants (without bread), is going to fund the project "L'acqua è vita", aimed at providing Sudan with drinkable water; Katia, by committing herself to go to work pyjama and pink slippers (and to upload the video on youtube), is going to help funding the projects "Casa del sorriso", in the frame of the adoption of entire communities of children in India, Zimbabwe, Perù, and Brasile.

Want to be happy?

Happiness is contagious! Surround yourself with happy friends or with friends who have happy friends. A research recently published in the British Medical Journal says happiness can quickly spread in a viral way within one's social network. The study used longitudinal network analysis, analyzing data related to 4739 individuals from 1983 to 2003, and found that when a person was happy, their friends became more happy too.

The researchers studied clusters of happy and unhappy people in the network, and discovered that the relationship between people’s happiness extends up to three degrees of separation. In other words, people who are surrounded by many happy friends are more likely to become happy in the future. Moreover, those who are central in the network are more likely to become happy too. Considering that effects decay with time and geographical separation, a significant spread of happiness was found between friends or siblings who live within a mile of distance, coresident spouses, and next door neighbours, but not between co-workers.

Once again, it seems we do are social animals, and thus our happiness is not an individual, but rather a collective phenomenon.

Let's spread happiness!
Posted by Michela at 10:07 am No comments:

The slides of my seminar on Social Network Analysis

A few days after the seminar on Social Network Analysis... here they are.
The slides include the introductory part: some basic concepts on SNA and the most important structural properties.

Some ideas for the possible casestudies for the LiveMemories project

On Tuesday 11th of November I'll be holding a seminar at FBK-Irst on my dissertation thesis... the title is: Introduction to social network analysis and effects of social network based feedback on group mediated communication.

Social Network Analysis is widely used in social and behavioural sciences, in economics, marketing and engineering. The social network perspective focuses on relationships among interactive units, identifying the unit of analysis not in the individual, but rather in a collection of social entities and the linkages among them.
The main Social Network Analysis indexes will be introduced with a particular focus on their social meaning.
Secondly, an experimental research will be presented that exploited some individual and group social network analysis indexes to provide feedbacks on some aspects of the communication structure in groups of people involved in a multiplayer online role-playing game. 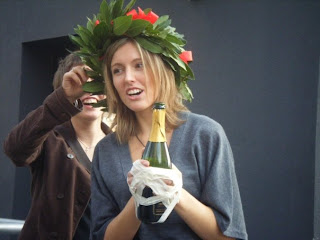 I graduated on the 24th of October in Social, Work and Communication Psychology at the University of Padua. My dissertation thesis was Effects of individual and group social network based feedback on group mediated communication.
Posted by Michela at 9:34 am 3 comments:

Wednesday October 22th 2008, there will be the public kickoff meeting for the LiveMemories project. Location: Trento, Liceo Scientifico G. Galilei. Check the program of the workshop, and visit the website and the blog La Memoria al Tempo di Internet!

At the workshop there will be Ricardo Baeza-Yates, Director of the Yahoo! Research labs at Barcelona, speaking about the Impact of Social Networks; Simon Delafond (Web producer at the BBC, UK), speaking about “BBC Memoryshare initiative”, and various other presentations by the project partners. In the afternoon there will be a round table on “Quale modello per la libera circolazione della Memoria?”
Posted by Michela at 4:44 pm No comments:

LiveMemories (Active Digital Memories of Collective Life) is a new project started on the 1st of October 2008 and scheduled to run for three years, funded by the Autonomous Province of Trento, and coordinated by Fondazione Bruno Kessler, in collaboration with several departments of University of Trento and of University of Southampton.

In the digital age, our records of past and present are growing at an unprecedented pace. Huge efforts are under way in order to digitize data now on analogical support; at the same time, low-cost devices to create records in the form of e.g. images, videos, and text are now widespread, such as digital cameras or mobile phones.

This wealth of data, when combined with new technologies for sharing data through platforms such as Flickr, Facebook, or the blogs, open up completely new, huge opportunities of access to memory and of communal participation to its experience.

From a scientific / technical perspective, LiveMemories aims at scaling up content extraction techniques towards very large scale extraction from multimedia sources, setting the scene for a Content Management Platform for Trentino; using this information to support new ways of linking, summarizing and classifying data in a new generation of digital memories which are `alive’ and user-centered; and to turn the creation of such memories into a communal web activity. Achieving these objectives will make Trento a key player in the new Web Science Initiative, digital memories, and Web 2.0, thanks also to the involvement of Southampton. But LiveMemories is also intended to have a social and cultural impact besides the scientific one: through the collection, analysis and preservation of digital memories of Trentino; by facilitating and encouraging the preservation of such community memories; and the fostering of new forms of community, and enrichment of our cultural and social heritage.

That's it!
Since the 15th of October I've been in the SoNet (Social Networking) exploratory project, aimed at exploring the Web2.0 through both theoretical and applied research. The project is carried out within FBK (Fondazione Bruno Kessler), a research organization of the Autonomous Province of Trento that promotes research in the areas of science, technology, and humanities.
So, the SoNet projects is aimed at studying characteristics of the networks (both online and offline), taking advantage of an interdisciplinary approach through the collaboration of psychologists, sociologists and computer scientists. Among the purposes of SoNet, bringing groundbreaking contributes to the characterization of social networks and their evolution in time, and provinding new advanced services to the users, are of a key relevance.
One of the first objective will be the development of a real social networking system involving FBK researchers, to improve new way of researching and knowledge sharing. The keywords within this framework are therefore "aggregation", "sharing", "collaboration", "dissemination". The strategies to achieve this are that of "eat your own dog food", "controlled viral spreading", and "always in beta". This approach will be employed to develop a social networking platform (a web based internal portal), and, in the meantime, to collect data for theoretical research.